On 13th June the band held a Pudding Party.  30 members of the Cheltenham Branch ate 15 puddings and a selection of cheeses at Liz’s house.  There was a magnificent 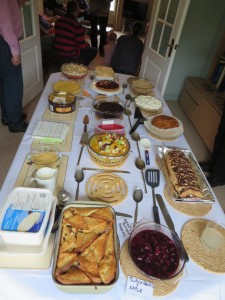 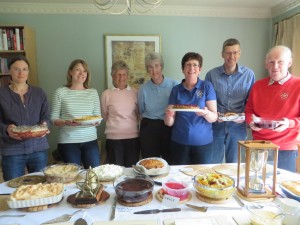 selection of desserts, all kindly donated by people who attended.  The weather was not kind and, although it stopped raining during the afternoon, it was not warm enough go into the garden to eat.  However, this did not stop everyone enjoying themselves and we raised over £150 for the Bell Appeal

Whilst we were eating we were given the results of the Branch Striking Competition that had been held at St Christopher’s, Warden Hill during the afternoon.  The judges were two members of the G&B Youth Team, and this was the first competition they had judged. 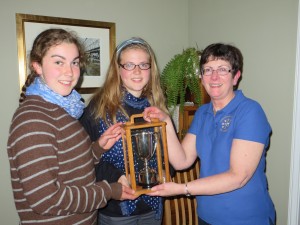 They had practiced their marking technique by watching other bell ringing on YouTube.  Much to our delight we won!  Four other teams took part but we beat them, and here is a picture of Liz Coke accepting the Banner Trophy from the two judges.